EIGRP is a classless, distance vector routing protocol that uses the concept of an autonomous system to describe a set of contiguous routers that run the same routing protocol and share routing information, which also includes subnet mask in its route updates.

EIGRP is sometimes referred to as a hybrid routing protocol or an advanced distance vector protocol because is has characteristics of both distance-vector some link-state protocols. For example, EIGRP doesn't send link-state packets like OSPF does. instead, it traditional distance-vector updates that include information about networks plus the cost o reaching them from the perspective of the advertising router.

EIGRP has link-state characteristics as well it synchronize network topology information between neighbors at startup and then sends specific updates only when topology change occur.

EIGRP has a default hop count of 100, with maximum of 255. In EIGRP speak, hop count refers to how many router an EIGRP update packet can go through before it will be discarded, which limits the size of the autonomous system (AS).


Neighbour Discovery- before EIGRP routers can exchange routes with each other, they must become neighbors, and there are three conditions that must be met before this can happen.

EIGRP routers that belong to different AS don't become neighbor and will not share routing information unless redistribution.

In short: AD is the neighbor router distance to the destination.

Feasible distance (FD) this is the best metric among all paths to a remote network, the route with the lowest FD that you'll find in the routing table because its considered the best path. The metric of a feasible distance is calculated using the metric reported by the neighbor that's referred to as the reported or advertised distance plus the metric to the neighbor reporting the route.

In short : FD is the total cost from local router to destination.

Feasible successor (FC): FC is basically an entry in the topology table that represent a path that's inferior to the successor route. FC is define as a path whose advertised distance is less than the feasible distance of the current successor and considered a backup route.

In short: Feasible Successor is the backup route and stored in the topology table.

Neighbor table: Each router keeps state information about adjacent neighbors. when a newly discovered neighbor is found, its address and interface are recorded in the routing table, stored in RAM.

Topology table: is populated by the neighbor table and the Diffusing Update Algorithm (DUAL) calculates the best loop-free path to each remote network. it contains all the destinations advertisement by neighboring routers.

In short: topology table contain list all the best route learned from neighbor.

Successor: a successor route is the best route to a remote network. a successor will be copied from the topology table to routing table.

Reliable Transport Protocol (RTP): EIGRP uses RTP and its function is to deliver EIGRP packets between neighbors in a reliable and ordered way. It can use multicast or unicast and to keep things efficient not all packets are sent reliable. Reliable means that when we send a packet we want to get an acknowledgment from the other side to make sure that they received it.

Here's description of the five different types of packets used by EIGRP:

Hello   A hello packets are used to discover EIGRP neighbors and sent via unreliable multicast, meaning  its doesn't require an acknowledgement.

Update packets have routing information and are sent reliable to whatever router that require this information. Update packets can be sent to a single neighbor using unicast or to a group of neighbors using multicast.

Reply packets are used in response to the query packets.

EIGRP metric:
EIGRP uses diffusing update algorithm (DUAL) for selecting and maintain the best path to each remote network. EIGRP uses bandwidth, delay, reliability, load, MTU, and hop count, out of these six component the first four are combined together using well known formula to produce a single number that we call composite metric. by default EIGRP uses bandwidth and delay in the metric calculation


Before we start  EIGRP configuration check out some important  of EIGRP CCIE exam topics. 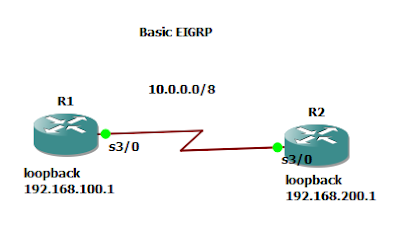 In the output, the "H" column on the left lists the order in which a peering session was established with the specified neighbor. The order uses sequential numbering, starting with 0. The "H" stand for "handle", which is an internal number used by the EIGRP implementation to reer to a particular neighbor.

Gateway of last resort is not set

Email ThisBlogThis!Share to TwitterShare to FacebookShare to Pinterest
Labels: EIGRP

It is no secret that football is among the most popular and widely watched sports. Everybody who likes football tries to find the best platform for free soccer streaming. So, what are the best free sports streaming sites? We are going to answer this question. On this page, you can find a detailed overview of the most widespread soccer streaming websites. Keep on reading and make the best choice for you live24th.me.

BGP backdoor it’s a well-known feature of the BGP which is used to change the AD (administrative distance) of eBGP. By default, external BG... 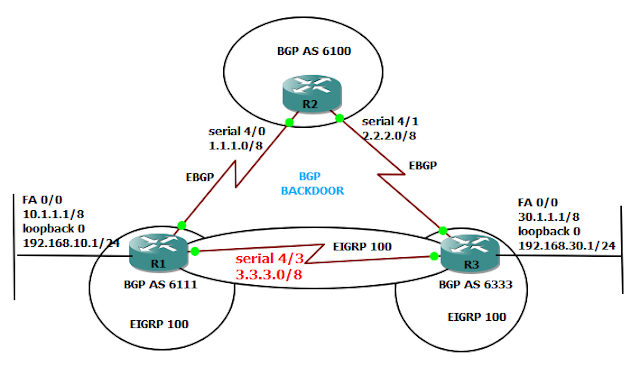