The OSI Model Advantages of the reference model
It divided the network communication process into smaller and simpler components, thus aiding component development, design and troubleshooting.
It allows multiple-vendor development through standardization of network components.
It encourages industry standardization by defining what functions occur at each layer of the model.
It allows various types of network hardware and software to communicate.
It prevent changes in one layer from affective others, so it doesn’t hamper development.

The OSI Reference model
The OSI has seven different layers, divided into two groups. The top three upper layers define how the applications within the end station will communicate with each other and with users. The bottom four layers define how data is transmitted end to end.

The session layer is responsible for setting up, managing, and dismantling sessions between presentation layer entities and keeping user data separate. It coordinates communication between systems and serves to organize their communication via three different modes: simplex, half-duplex and full-duplex.

Simplex:  is simple one-way communication, kind of like saying something and not getting a reply.

Half-duplex: is actual two-way communication, but is can take place in only one direction at a time. It’s like walkie-talkie.

Full duplex: is exactly like a real conversation where device can transmit and receive at the same time. Like a telephone conversation.

Feature of TCP.
flow control
Flowing control prevent a sending host on one side of the connection from overflowing the                  buffer in the receiving host.
The segments delivered are acknowledged back to the sender upon their reception.
Any segments not acknowledge are retransmitted.
Segments are sequenced back into their proper order upon arrival at their destination.
A manageable data flow is maintained in order to avoid congestion, overloading and data loss.

Connection-oriented connection
In reliable transport operation, a device that wants to transmit sets up a connection-                       oriented communication with a remote device by creating a session is called a setup or three-way handshake.
The first “connection agreement” segment is a request for synchronization.
The second and third segments acknowledge the request and establish  connection parameters.
The final segment is also an acknowledgment. It notifies the destination host that the connection agreement has been accepted and the actual connection has been established.
A service is considered connection-oriented if it has the following characteristics:
A virtual circuit is set up(e.g., call setup   or three-way handshake).
Its uses sequencing.
Its use acknowledgements.
Its use flow control. The types of flow control are buffering, windowing and  congestion avoidance.

The quantity of data segments measured in bytes that the transmitting machine is allowed to send without receiving an acknowledgement for them is called a windowing.

Reliable data delivery ensures the integrity of the stream of data sent from one machine to the other through s fully functional data link. It guarantees that the data won’t be lost or duplicated. This is achieved through something called positive acknowledgment with Retransmission.

The network layer also called layer 3 manages device addressing, tracking the location of devices on the network, and determines the best way to move data. Two types of packets are used at the network layer: data packets and route packets.

The data link layer provides the physical transmission of the data and handles error notification; this means that the data link layer will ensure that message is delivered to the proper device on a LAN using hardware address. The IEEE Data link layer has two sub layers:
Media access control (MAC) 802.3
Define how packets are placed on the media. Contention media access is “first come/first served”
Logical link control (LLC) 802.2
Responsible for identifying networks layer protocols and then encapsulating them.

Physical layer does two things: it send bits and received bits. The physical layer specifies the electrical, mechanical, procedural and functional requirement for activating, maintain, deactivating a physical link between end system. This layer is also where you indentify the interface between the data terminal equipment (DTE) and the data communication equipment (DCE)

Data circuit-terminating equipment.
The DCE is usually located at the service provider. While the DTE is attached device.

Data terminal equipment
The service available to the DTE is most often accessed via a modern or channel service unit (CSU/DSU)..

Email ThisBlogThis!Share to TwitterShare to FacebookShare to Pinterest
Labels: CCNA

By default, Cisco routers permit and forward all the packets they receive if the route is matched in their routing table. In case we want ... 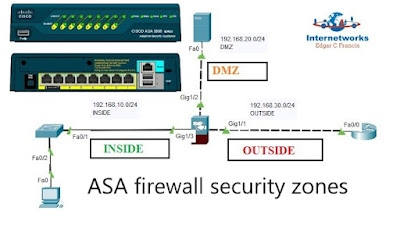